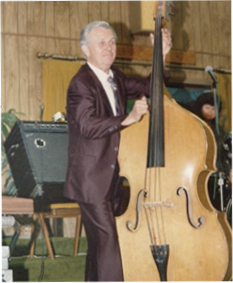 Reverend Harold Ray Branham was born in the coal mining region in the mountains of Eastern Kentucky.  His background was singing in church and playing music.  After returning from the Navy, he went into show business.  He entertained with Grand Ole Opry stars like Eddy Arnold, Cowboy Copas, Hawkshaw Hawkins, and others.  He is a talented singer and musician.  He married Mildred Maxine Franklin in 1952, and together they organized and pastored several churches and evangelized across the country for over 50 years.  Sister Branham went to be with the Lord in December of 2002 after a lengthy battle with Alzheimer's.  She is sorely missed.  Ray remarried in 2006, and he and his wife Linda are evangelizing together.