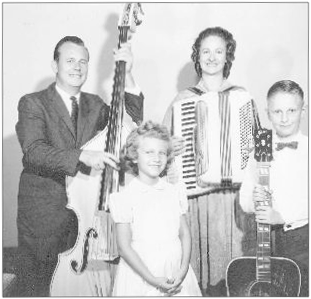 The Branham Family has been ministering for over 50 years. Rev. H. Ray. Branham and his wife Mildred Maxine started out as an Evangelistic team in 1952. Ray preached and played the upright bass, and Maxine played the piano and the accordion. Then, Ronnie and Donna came along and joined right in with Mom and Dad. The group continued to grow as Ronnie and Donna added their spouses Debbie and George. Then the grandchildren came along and Tyler, Katie, and Caleb added their musical talents to the group.

The Branham’s have ministered on radio and television, in local churches, campmeetings, homecomings, revivals, conventions, and retreats. Their travels have taken them all over the United States, and to Europe, Africa, and Asia. They have met thousands of people, and they have seen many souls accept Jesus Christ as their personal Savior. Their unique style of ministry has blessed many people. They have been truly dedicated to spreading the Gospel in word and song.